Organised through Ecosphere, I was due to spend just under two weeks with a local family in the village of Chicham, a small village of 75 houses in the Spiti valley. While I had already spent a few weeks in the Spiti valley, and therefore somewhat acclimatised, these were predominately in Kaza, which sits at about 3,700m above sea level. And when asking the host what I would be doing all day, I was told with a wry smile that the people of the village worked hard. They would work about 12 hours each day, helping mainly in the fields, but that I could see how much I could cope with. I was a little tentative, because Chicham sits at 4,200m. 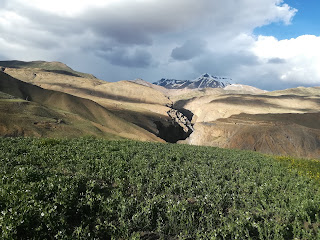 The idea of this volunteering was to live with a local village family, eat with them, work like them, and get an actual uncensored version of what it is like to eek out a living at this altitude.

The reason they work so hard, is because they only have 6 months to make a living. Once winter (and the snow) arrives, there is no possibility of growing crops (except in the greenhouse), but those are limited, and not for sale, but only the house’s (and their animals’ consumption). 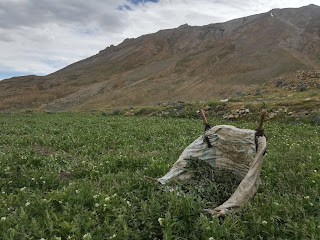 Takpa is the owner of the house, and he picked me up from the Ecosphere office. An hour’s drive later we arrived at his house. He had three large rooms on the ground floor: a bedroom for a helper of his; a large lounge for where the family spends all winter (basically in this one room for six months, because the snow is too deep to get outside); the kitchen, where Takpa and his wife sleep; and at the end of the passage is a greenhouse, with vegetable patch, and washing area. Cleverly, he has put the washing area inside the greenhouse, so that even in minus temperatures in winter, you can still be relatively warm, and have a shower. 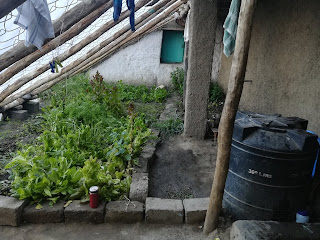 Upstairs are the guests / volunteer rooms, as he also runs a homestay. I got a large room, with ample room and sitting area.

Niceties out the way, and an evening’s rest under my belt, work was due to start. I found out that they really were not kidding about 12 hour days, and however hard you feel you may work, I do not think you can know what a hard day’s work is, until you have spent 12 hours in a field.  They were always though accommodating to those ‘less seasoned’, and try as hard as I could, the best I got to was 11.

So come rain, wind, or sun, Takpa’s wife (Padma – a sweet frail looking lady, but who is one of the hardest workers I have met), his mother, and their worker Puntshuck get into the field just after 7am, and do not return until after 7 in the evening. 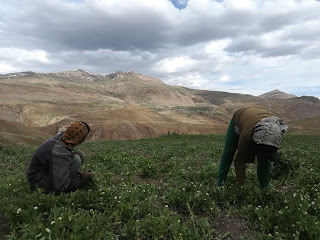 As I was living like a villager, I too got into the field just after 7am, after some tea and breakfast in the house.  Their cash-crop is green peas, and we spent the first number of days deweeding. Takpa’s family is one of 13 families who were the original inhabitants of Chicham, and therefore the only people in the village permitted to own land. 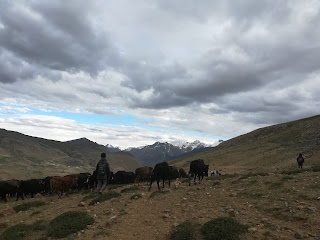 So, a typical day meant I woke up at 5:30am, got up and stretched (the old back and knees needed some love after a day of toil). 6:30am was a light breakfast, oats or a pancake, before heading into the field at 7am. Some fields are close to the house, perhaps a 5 minute walk, but most are a lot further. 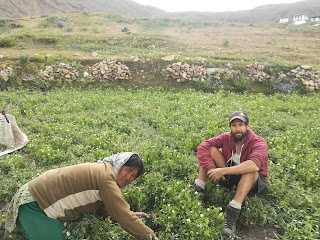 We worked until about 1pm, carrying out the daily tasks – which were primarily clearing fields from weeds, when lunch was served.  Lunch was mostly tirik (delicious, homemade bread) and either (also homemade) chutney (crushed tomato, chili and coriander), but mostly butter (freshly curdled from their cow).  This was washed down with more tea, and tsampa (a crushed barley mixture).  This held you over until about 4:30pm, where there was another tea break and any leftover tirik and tsampa.  Work continued until dusk, where at around 7pm, everyone packed up, and then went to make dinner.  Dinner was served between 9:30pm and 10pm, so you have a chance to relax, wash, and maybe do another stretching session. You then sleep and repeat. Don’t forget to peak outside just before, when the village lights are off. On a clear night, the sky is truly something to behold. 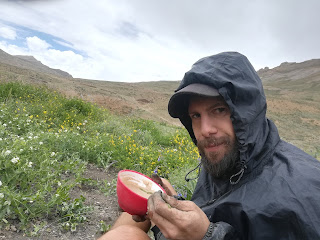 I was used to the kind and overly hospitable nature of people in India, and this house was no different.  Padma and Takpa always made sure to try and serve me generous helpings, and seconds and thirds, until I had to pull my plate away. I quickly learnt “maan”, which meant enough.

Spitian food is similar to Nepali/Tibetan food. The momos, thentuk, and tirik were amazing. We also had more traditionally, Indian curries; and Takpa even cooked a really good pasta one night. 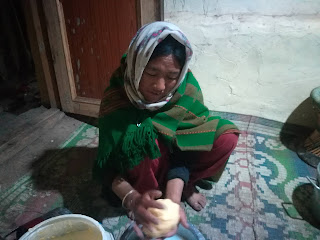 Besides for the work deweeding in the fields, I helped plough other fields with a group of yaks (yes, literally, yaks), and spent other days in the mountains herding cattle and collecting dry cow dung. 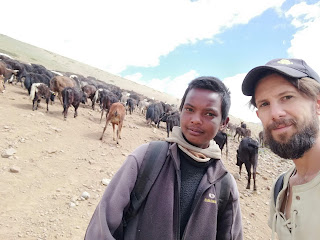 Unfortunately, after 10 days, my time was over. I thanked the family for their hospitality as best as I could. I was so grateful for a real authentic experience on village life, and to learn how tough it is.  An amazing adventure that I can only highly recommend – if you are up for the challenge.