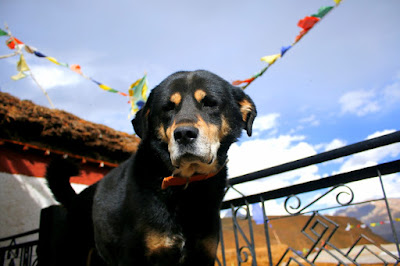 Mark Twain once infamously said “The more I learn about people, the more I like my dog”.  Dogs are said to be man’s best friend and most loyal companion and they’ve been with us through the course of time as protectors, guides and most essentially as tail-wagging friends. But of late, dogs in Spiti have turned into a nuisance or so the people say.

Winters are a hard time in Spiti. While, it’s the season for joys, festivities and relaxation for the locals who work throughout the summers; for the fauna of Spiti, it’s the season where food becomes absolutely scarce. Be it the herbivores like blue sheep and ibexes, which have to move over great distances in search of grasses which can grow through winter snow and freezing cold temperatures or their predators like snow leopards and wolves.
Dogs are no exception when it comes to food scarcity. In summers, they can scavenge for food in and around the villages. They also get some amount from the local restaurants and the tourists coming during the season, but in winters, the scene changes, restaurants close down and there are no tourists. Many of the dogs, especially older ones often starve to death and are quickly scavenged upon by other dogs. They even resort to eating human feces and pups in face of extremities.

It turns out that dogs have found their own easy yet destructive solution to the food problem. They have turned wild and have started hunting livestock in packs! So the same dogs that have been know historically and even till date to be great Sheep Dogs protecting livestock from predators are now the culprits. In the highland villages, where food is even less, dogs are now hunting goats and sheep in worrying numbers during winters.

Not so long ago, Prince wasn’t the only dog in Demul. There were 15 more! And then they started killing livestock out of sheer desperation and need. Slowly as the villagers began to incur heavy losses, their patience and tolerance began to wear thin and one day finally, the dogs were taken care off for good.

All over Spiti as this problem intensifies, instead of looking for the root causes of the problem, the easy solution is culling the dogs or relocating them at high passes like Kunzum and Rohtang. As a result, many packs of dogs have moved out of the villages and adopted the ‘wild way of life’ permanently. That means they now hunt sheep and goats, which may have strayed away from the villages or even during the shepherding hours if the shepherds aren’t vigilant enough. There have been reports of dogs breeding with the Himalayan wolves too ! 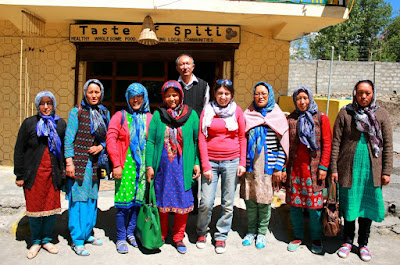 Not all heroes wear capes, right?

Meet this group of beautiful charismatic Spiti women who have decided to employ a more logical solution to curb the problem. When one looks at the root cause of the problem, finding solutions becomes easier. The root cause here is the lack of food source for dogs in the winters. It is due to the lack of food, that dogs started hunting livestock and becoming wild. So if you feed the dogs in winters, you curb the problem. That’s what this group of local women in Kaza did. With an initial push from Ishita and the watchful guidance of Nono Sonam Angdui along with incentives from the local administration for this group of women, these ladies now prepare thick atta rotis in bulk on a weekly basis and feed them to the feral dogs of Kaza in the winters. The result - the dogs at least have bare minimum food for survival and do not need to resort to turning wild and hunting down livestock. This is the second winter now that the dogs of Kaza are getting some food to survive on and its very heartening to see the compassion grow as more residents of Kaza and Spiti come forward to support this initiative. 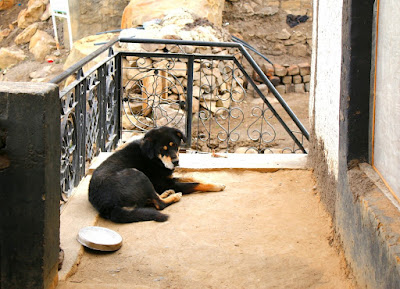 Hopefully, this model will be adopted by the villagers in the high altitude villages too, where the scale of conflict is worse. Culling or relocation is no long term solution, besides being in complete contrast to the core Buddhist ethics of compassion and non-violence.

Dogs are not evil; they’re just trying to stay alive. Simple yet effective solutions like the one employed by the ladies in Kaza can benefit both the dogs and the people. Maybe someday, Prince would have more of his kind as companions and he wouldn’t have to bark alone. Until that time, the travelers and tourists coming to the valley in the summer months can surely help too. If you can help connect Ecosphere with animal welfare organizations, vets and dog lovers that can help with sterilizations and vaccinations of the dogs, this will help to reduce their numbers and help curb the problem.  If you can adopt cute little puppies and give them a permanent home, there’s nothing better! If you are good at talking, talk to people while you travel in Spiti, tell them how dogs can become loyal guardians and protectors instead of savage beasts preying on their livestock if they are fed.  Meanwhile keep sneaking food to those cute mutts. :) 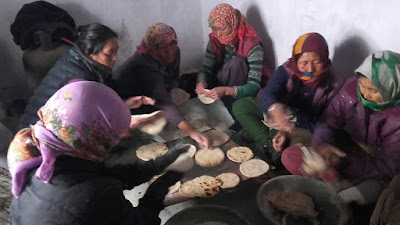 Sunday rituals of the lovely ladies 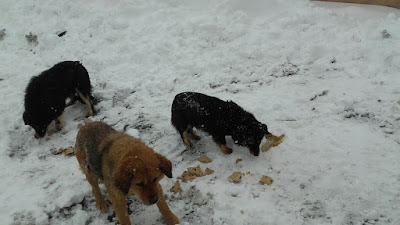 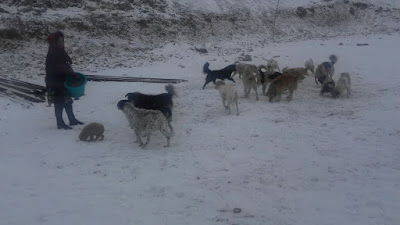