#StoriesfromSpiti: The boy in the blue sweater.

Why has it snowed less this year? Where does the ‘cheetah’ live? Where does devil eat? Why are foreigners so white? Where can one find rabbit holes and wolf caves? Why are the mountains so tall? Why is sunlight yellow in colour? Why are the Bingo Mad Angles crisps so costly in Spiti? 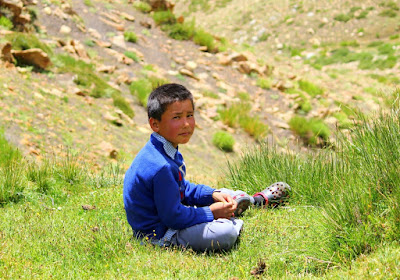 (This guy knows the answer to all the questions asked above :) )

Mohan a.k.a Jaggu is one of the prolific guides who work with Ecosphere through the summers. The workload is so heavy in the summers that he seldom gets time to go home. He goes home only on special occasions and when lady luck showers her blessings on him in form of volunteer groups which have Demul on their itineraries. On one such lucky day, Jaggu came to Demul, his home with a group which was working in Chicham. He recognized me instantly and the next thing I know we’re sipping tea and discussing the progress of the greenhouse being built in Chicham by the group he was leading. As we parted ways, he invited me for a dinner of my favourite Potato momos at his house to which I happily agreed.

In the evening, I was at his door even before time. I called out to him “Jaggu daaas!!” No reply came. Then I called out his name again. Suddenly, two curious eyes popped out of kitchen window and then vanished again. I called out “oye”. This time, the whole face came up with a wide smile etched across it. That is how I first met Tenzin Norbu.  After that evening we became an inseparable lot until my last day in Demul.

For the next few days, clad in his favourite blue sweater and adorning his characteristic smile styled across the crimson cheeks, Norbu accompanied me everywhere I went except in my birding forays. He would have loved to go birding with me too but his mother refused every time for all the right reasons because the boy claimed that one of his aunt knew the location of a wolf den and he knew the way to it. Surely a worrying prospect for any mother. So we didn’t dwell outside the village together but inside the village, wherever I went, Norbu could be seen filtering around me. 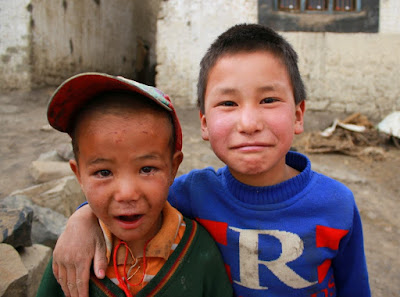 (Nawang Tanpa and Norbu in a single frame! That’s a lethal combo!)

On the first day of our friendship, he brought me a dead caterpillar and declared it to be a baby snake. On the second daym he taught me how to avoid rams high on hormones. On the third day, we talked about our respective nonexistent girlfriends and how Nawang Tanpa, the “konsi class mei hai?” guy whom I thought to be the most innocent guy in Demul, terrorized kids even senior to him by throwing pebbles at them(I tried confirming the same with Nawang, but like always he wouldn’t answer any question except.. J ) On the fourth day, he showed me a bird which turned out to be a new bird for me and we watched glimpses of a superhero movie he’d never seen before.


The fifth day was the best day. All the ladies from the village and a few men were going up to the highland meadows above Demul called Yulsa to be a part of a pooja ceremony. This meant, we both could finally go out of the village together. That morning, Norbu came into my room beaming with enthusiasm clad in a neat blue and white shirt, new pants, new sandals and of course his favourite blue sweater while I was still trying to find something clean to wear. We were already late so I just put on whatever I could get my hands on. Norbu, me, his mother and another lady started for Yulsa after most of the ladies had already left. Half a later, like always, I was barely crawling up while Norbu was literally running up jollily. 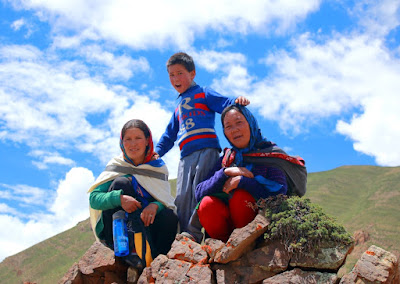 (Here Norbu pretends to be the saviour of two ladies who have got stuck at the edge of a cliff, the two ladies being his mother on the left and aunt on the right.)

Every now and then, he would wait for me to catch up with him and point out a bird and ask its name. He was particularly intrigued, when I clicked and showed him a picture of a bird called horned lark. After some discussion, it was settled that the horned larks were churus (cows) of the bird-world. The ladies found the churu of the bird world quite interesting too. Further up, we took a sudden detour much to his mother’s worry and reached a patch next to a barley field which had a lot of holes. He said the holes were “khargosh ka ghosla”(rabbit holes).

So we waited silently for about 15min in hope that a rabbit would peep out eventually. But that didn’t happen. So we quickly got back on the track where his mother and the other lady were waiting for us. We picked up clumps of sweet edible grass that grows in the highland meadows and continued on our journey stopping intermittently for the birds and rest. His stories didn’t end until we finally reached Yulsa. He showed me a colony of a thorny plant growing along hillsides on the way and proclaimed them to be devil’s food to which his mother concurred thoughtfully. He also told me about a small pool where people from the village go up to bathe on hot days like the one where we dealing with that day and somehow we finally made it to Yulsa. What happened at Yulsa that day is another story. 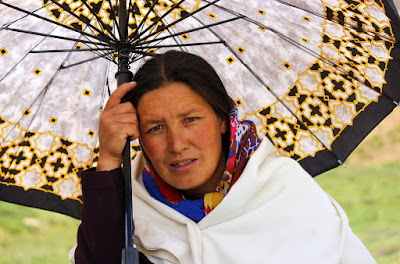 (Norbu had been constantly nagging me to teach him how to use a camera for days, so at Yulsa, I taught him the basics of focusing and clicking a picture and gave him the camera to operate it all by himself. This is what the boy in blue sweater did with it. That’s his mum. This picture is one of my favourites from Spiti.)

The next day was spent frolicking around the village and talking to the ladies working in the fields. We also discussed the reason behind the inflated prices of lays and bingo mad angles. We concluded it must have something to do with the air inside crisps packs and the transportation may play some role too. 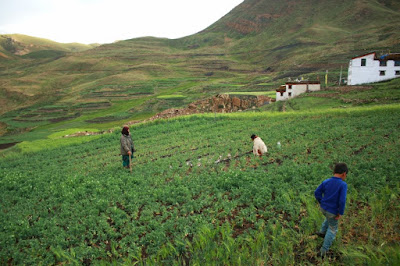 (In the fields...trying not to ruin the hard work done by ladies :p ) 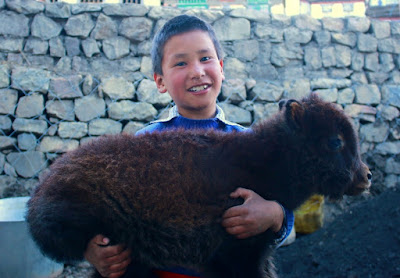 (And, a lesson on how to life yak calves by the world renowned  yak lifter; Norbu kaka :) )

On my last day in Demul, we finished the unfinished tasks. He had brought in his cousin sister to assist us in the work. So we all sat down together and watched Captain America: The civil war, The Amazing Spiderman and and  THE CONJURING in one go. Needless to say, we screamed our lungs out during Conjuring while Amma and Norbu’s mom sitting in the next room wondered what was wrong with us. We decided to stay in my room that night but the adults weren’t going have it our way. So we bid quiet farewell instead of proceeding with our full night movie marathon. 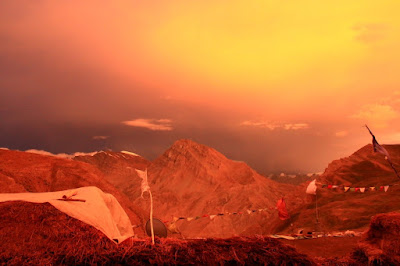 (As we were wondering how god bought colours for his paintings.. )

No worries, though. Four days later, I was back in Demul for a day.

I met him and casually proposed that we go to Mulchay and see the family of red foxes that lives there. He just ran off suddenly and came back after fifteen minutes wearing a new set of clothes and shoes and announced that he was ready for the foxes.  Obviously we didn’t go but his mother went all the way to Mulchay looking for him because apparently he had just told her that he was going to see red foxes and ran off. We somehow managed to escape the scolding when she found that we didn’t actually go. Phew. 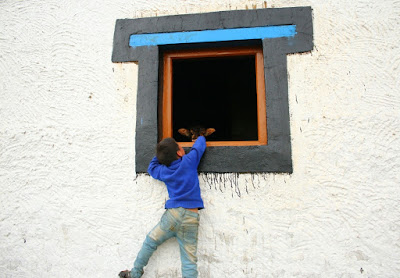 And like always, we spent the rest of the day looking for other jobs to do. Psst, we also broke into a locked greenhouse via the  window. Please don’t tell this to anyone when you go to Demul. Especially Norbu’s mum. Thanks ! :P
Email ThisBlogThis!Share to TwitterShare to FacebookShare to Pinterest